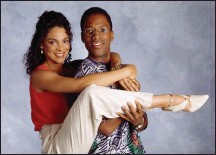 It’s homecoming season and ‘A Different World’ is celebrating 35 years of the legendary show with TV One! The impact of Hillman College and its characters single-handedly is the reason why an entire generation decided to attend college and especially historically Black colleges and universities. From 1987 to 1993 the NBC sitcom showed the life and culture of attending an HBCU from social life, academics, greek life, social issues, and more. “There was something for somebody, whatever shade of Black you were or whatever shade of Black you were not,” Charnele Brown who played Kim Reese shared in an interview with NBC. “Whatever age group you were in, whether you were retired and trying to make your contribution to these young people like Mr. Gaines was. Whether you were a former military person like Colonel Taylor was. Whether you were somebody who thought it was over for you, but you were gonna take a chance on yourself and reboot yourself and try again like Jaleesa was. Or you were privileged and really had no concept of what the average person had to deal with like Whitley was…There was something for everybody.” At the time ‘A Different World’ was groundbreakingly covering issues during that time and how they affected black students. From HIV/ AIDs, police brutality, date rape, domestic violence, and racism, the show touched on controversial topics that are still relevant to today. Not only was the content of the show monumental, but the cast has made a huge impact across the culture. Whitley Gilbert played by Jasmine Guy and Dwayne Wayne played by Kadeem Hardison showed black love on a campus that still can be seen as #relationshipgoals for us. Beyond Dwayne and Whitley, the sitcom’s fandom is rooted in the characters from the show. Viewers appreciated the way the characters were portrayed and could see themselves in the students on the screen. ‘A Different World’ also had great guest stars on the show from Tupac, Patti LaBelle, Whoopi Goldberg, Jesse Jackson, Heavy D, and more. The authenticity and black pride shined through each episode which has led the show to be able to stand the test of time. “People could feel our pride being black,” Charnele Brown told NBC. “This is who we are. We love who we are. We want to learn. We want to grow. We want to be great people. We want to please our parents. I think that’s why a lot of people are holding on to us.” The iconic show displaying black culture through music, art, and fashion while on a college campus made education “cool” for generations to come. Since these things had been ignored previously by the mainstream, ‘A Different World’ became a huge success, especially after Debbie Allen took over as producer and director of the show. “She that awareness with all of the dancing and all of the fun and all of the clubs and all of the stepping and what the life on campus was really about and she infused that in the storylines,” expressed Glynn Turman who played Colonel Brad Taylor. “She was a marvel, a whirlwind that took and turned that upside down.” Howard university graduate Debbie Allen took over the show after getting a call from Bill Cosby “to clean house.” “Having come from Howard University. I knew what to do with the show. I had lived it and breathed it. So I knew the stories that they needed to be telling,” she said. While ‘A Different World’ was making a difference culturally on the TV screen, it also made a huge impact in the classrooms. “From the debut of The Cosby Show in 1984 until the end of A Different World in 1993, American higher education grew by 16.8 percent,” Dr. Walter M. Kimbrough, former president of Dillard University, shared during an interview with the New York Times. “During the same time period, historically black colleges and universities grew by 24.3 percent — 44 percent better than all of higher education.” The show really made a huge impact by showing black academic achievement and cultural identity in the education space. “We’d never seen black kids in college on television,” said Hardison. “Here comes this show and if it caught you at 14 years old it took you through high school and propelled you into college and it created a lot of successful, educationfirst minded people who can’t let go who know what it was like for them and what it did for them and they want it back. They want it back for their kids and this new generation.” To celebrate A Different World’s 35th anniversary TV One is having an all-day marathon on Sept. 24 starting at 6 a.m. with Jasmine Guy and Kareem Hardison sharing secrets of the show. It will also be followed by Kadeem Hardison’s Uncensored episode on Sunday, Sept. 25th at 10p/9c where he will open up about his career and romance he once had with Cree Summer, who played “Freddie”.